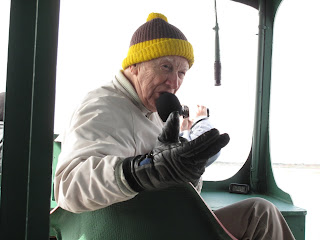 During a Myakka State Park boat tour last February, a seasoned guide explained to us that the distance between the alligator's eyes and nostrils in inches is an estimate in feet to the alligator's total length.

Yesterday morning, Achim came up from his office to tell me that there was a large gator in our pond.

The week before, we had seen what we thought was a small gator, and thought little of it. 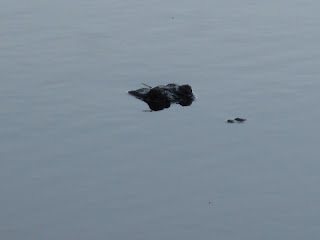 This time, however, we looked at what we could see of the head. It looked like there must be close to a foot between the wider and narrower ends of the trapezoid making up this reptilian face.

A little research online helped me to determine what to do: 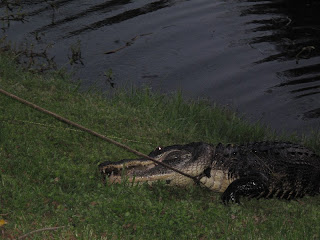 "Generally, alligators may be considered a nuisance when they are at least four feet in length and pose a threat to people or their pets or property."

So in this case, this gator was double the minimum size. Did it pose a threat to us? Well, it was right at the edge of our property, hunting. I sat for over an hour, watching this floating head almost at my feet. We were having a kids bash on Sunday, and my three will be out of school in a week. Did I really want to wait until this giant gator 'posed a threat?' 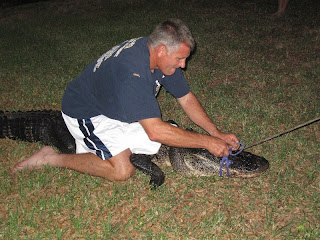 The gator has been living in Sarasota for longer than we have. The gator was in his natural habitat. I struggled with the decision we had to make. We made it, and called.

The trapper came with what seemed to be two kids and maybe grandpa. With very few words and just a few minutes of quick, swift pulls, Sarasota Dundee had the lasso around the gator's neck. He yanked the beast out of the pond, threw a towel across the gator's eyes and had the snout wrapped up with electric tape. 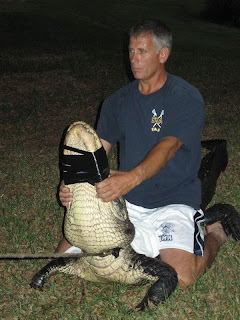 It happened so quick I didn't have time to say, "wait! I change my mind! Let my children risk swimming with a 9 footer! I can't do this to such a majestic creature!" But it was too late; the trapper had his catch.

The only words he exchanged with me was the reply to why he didn't fight more: "this gator is tired."

He focused on the job of dragging the beast over the lawn to the front yard, where they heaved the wrapped up animal in the back of his white pickup and was gone.

I felt like our neighbors were booing and hissing. We were the perpetrators, the wildlife killers. These were neighbors who either had no small children or didn't live on the water. In fact, we are the only people on this body of water, as far as we can see, with children. 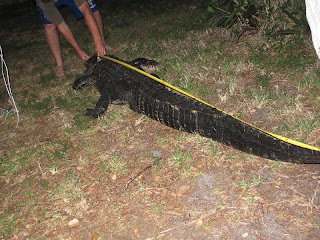 Can anyone understand why we needed to call 866-FWC-GATOR? Am I simply to tell my kids not to go near the water, period? It was a sad sight, but I learned that they have "harvested" 9,733 such gator in 2008 alone. That's 26 of these every day! From what I understand, gator are not an endangered species. And I promise, if I see a sweet little gator in my pond, I'll leave it alone. But after all is said and done, I feel relieved that I don't have to fear for life and limb every time I open the screen door to the backyard (this gator would have had the screen door for lunch.) 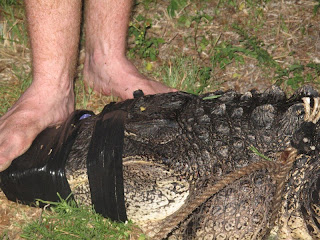